Popular posts created in 2009 from Absoblogginlutely.net

Following up from the previous post on most viewed pages of Absoblogginlutely.net in 2009, here are the most popular posts that were written in 2009. All but two of these are solutions to problems that I encountered during the 2009. Some of them were quick google searches, others were based on research and experience but hopefully the solutions have helped others in the same situation that I’ve been in.

Popular posts in 2009 from Absoblogginlutely.net

In common with a lot of other bloggers I’m posting a top 10 list of the most popular pages from Absoblogginlutely.net in the year 2009. It is rather worrying that all of the pages are from posts I have done in previous years. Even more concerning is that a couple of the posts are about updating antivirus software from 2004 so it is a bit scary that people were coming across the same problem in 2009. Either people are 5 years behind upgrading their antivirus software or Symantec still haven’t fixed the issue 5 years later…..

I’ve been playing around with Lifestream over the past few months and now have it working properly. It seems that there was a clash with the plugin upgrade notifier and as that didn’t work anyway, I disabled it and now the cron jobs run successfully and update my lifestream page – that pulls together all the various updates from various internet sites and blogs that I make.

Why I moved from MovableType to WordPress

I was asked in the comments why I migrated from MovableType to WordPress.  There were several reason why I decided to make the switch.  The primary reason was the incredibly long time it would take to publish a post in MT.  I could actually hit Post in MT, fire up a new web page, connect to my testing WP site, create a new post, enter the title, paste the content in, hit publish and then view the website. In the meantime MT would still be thinking about saving the original post.

The time taken to republish the site after a change such as a design change was so great that some of my older posts still had old styles as the republishing system would time out before it could complete the task.

One of the other things I really like about WordPress is the ease of upgrading the software to the latest version. Yes, WordPress has had more releases, but when it takes about 2 minutes to upgrade the system its really not a problem (especially now that there is an automatic upgrade function).  MovableType has also just released a new security release which is one of the reasons why I made the switch *now*.

I was also hoping that the spam filtering would be better on WordPress than MovableType. I’ve had several idiots spamming the blog with russian comments in MovableType – they wouldn’t get through but I would have to go and delete them. In the one day that I’ve had WordPress up I think I’ve had more spam comments get through to the spam queue, but again it was easy to delete them all – a “select all” option and then delete, followed by an “all done” about 3 seconds later.

Themes in WordPress seem to be a lot cleaner and there are a lot more themes out there to pick from – MT’s selection was pretty small. This wasn’t that much of an issue to me as I was pretty pleased with my existing theme in MT (and have had it copied by a few people so it couldn’t have been that bad!)
The big concern about switching from MT to WP is typically due to the fact that WP is database driven and therefore doesn’t have any of the pages (by default) saved on the machine so if the database is down, then so is the website.   This site doesn’t have that many visitors so I don’t see this as being that much of a problem and normally if the sql database is down, then its probably likely that the web server is going to be down too.

I’ve not looked at the various caching plugins as I doubt I’m going to need it, but it is nice to know this option is available.  I may switch it on later once I’ve got the site up and running and I’m not making many design changes to it.

For those of you interested, I will also be posting my experience about the upgrade and some hints and tips – the existing WordPress migration documentation is in dire need of being updated!

I was hoping to get the switch from MovableType to WordPress up  and running for the 1st of January but I didn’t want to go live until I was ready and near a keyboard in case there was problem.  I’ve spent several hours this weekend getting the layout and stuff ok to go live. For those of you using feed readers to see this, you probably won’t see much difference although I have added a few options to the feedburner feeds and also include my delicious saves now. Do stop by the main website and let me know what you think though.  Any issues then let me know, most of the work and testing was done with firefox as that is what most of you use. There are a few cosmetic issues with internet explorer that I’ll work on over the next week or so.

I’ll also be posting some hints and tips on the migration steps too.

Podcamp Ohio starts in just under 2 hours – I’m looking forward to it. Not sure how big or crowded it is going to be – there are 400 users on twitter following the podcamp ohio feed and they have made 280 tshirts so I’m guessing somewhere between 280 and 400 people 😉 If you are going be sure to say hello – if you are reading this blog you should be able to recognise me from the pictures I’ve posted on the blog before and the fact that I just got my tshirt from cafepress yesterday.

Mike Mcbride tipped me off about PodCamp Ohio – a free meet up in two weeks (6/28/08) for bloggers and podcasters. This is just down the road from me so I’m going to go. They are still in the planning stages but it sounds like it will be pretty good. Registration is requested so if you are planning to go then register and drop me a line. I’m going to try and get a tshirt made up pimping the blog, hopefully I’ll get a design done today and it’ll arrive by then.

Mike Mcbride tipped me off about PodCamp Ohio – a free meet up in two weeks (6/28/08) for bloggers and podcasters. This is just down the road from me so I’m going to go. They are still in the planning stages but it sounds like it will be pretty good. Registration is requested so if you are planning to go then register and drop me a line. I’m going to try and get a tshirt made up pimping the blog, hopefully I’ll get a design done today and it’ll arrive by then.

According to Google Analytics, the following are my most popular posts. Funnily enough, the post to Manually Remove Google Desktop had twice the number of hits to the Absoblogginlutely! home page.

85% of my traffic came from search engines – 75% in total from Google. This shows I have great Google ranking but not many people stick around 🙁

I run a small site with only 61,000 unique visitors 2000 of whom are suprisingly on dialup, 45% of users use dsl or cable – no surprise there really.  Internet explorer accounts for 68% of users which I think is pretty large for a technical site. The 8 users who visited more than 200 times in the past year really need to learn the benefit of RSS feeds – if that is you and you need some help then let me know. 53% of users are in the USA, 13% in the UK.

Finally, as all good statistics are not complete with some sort of a graphic here is a map of visitors from the world – there are very few locations that haven’t visited – Madagascar was one that I could actually recognise from the map. 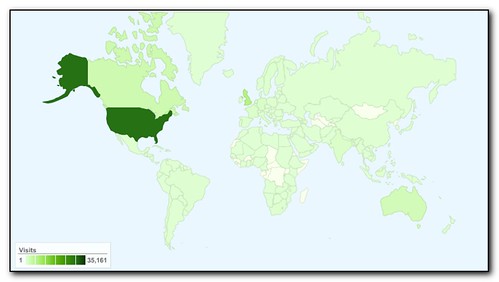 Happy New Year everyone – I hope you all had a good evening. This is a quick post to announce my new blog, Absoblogginlutely! – IRL (IRL stands for In Real Life) and this will continue my no techie posts. I have had several users say that my main blog is too technical but they would still like to keep up to date with the news so feel free to head on over. I have been working on some of the content and posts over the Christmas break, but you’d be surprised as there doesn’t look like there is actually much there at the moment but the About Me page and the Contact Me page will make an appearance on this blog eventually.
There will be some cross posted content where appropriate, but this blog will focus on more of the Tech content and IRL will contain other things. This year I also intend to work on my photography skills and related content to that will be on IRL.