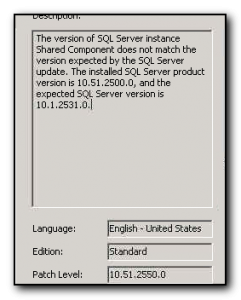 Thanks to the post from Danalive on the sql msdn forums by adding the characters ReportServer between the ReportServerVirtualDirectory tags in C:\Program Files\Microsoft SQL Server\MSSQL.3\Reporting Services\ReportManager\RSWebApplication.config the error message of “The reportservervirtualdirectory element is missing” disappeared and I could access the Reporting Services homepage.
This weekend I had to rename the server as part of the GoLive procedure with this server. Sure enough, the rename of the server caused a lot more errors. There are a couple of pages on the MSDN site with instructions – Basic overview and instructions for renaming SQL2005 and Renaming a Report Server.
So far I’ve had several issues with this server – SQL2005 seems to have the buggiest and most unstable installation routine I’ve ever seen.

Cannot connect to servername on a new sql instance

I’m not an expert at SQL by any means but I installed a new version of SQL server 2005 and got a cryptic message “Cannot connect to servename. Additional information – An error has occurred while establishing a connection to the server. When connecting to SQL Server 2005, this failure may be caused by the fact that under the default settings SQL Server does not allow remote connections. (provider: Named Pipes Provider, error:40 – Could not open a connection to SQL Server) (Microsoft SQL Server, Error: 2)
I thought it was ironic that I couldn’t use the management software to manage the system to try and work out what was wrong. After enabling TCP/IP on the server interfaces I was still not able to connect. Google searches didn’t return any useful information. After a while of testing various things we discovered that changing the Servername entry to be servername\instancename it works. As this is a replacement server the instance for SQL is not the same as the hostname for the server. In my case I had to put the servername as server2\server (with server being the instance created and the same as the instance on the current live server).
Hopefully this will save somebody some time.

Microsoft have crippled the sql express edition such that you can’t do a scheduled backup in the same way that you can with the standard sql servers. However by running a backup and saving the commands to a script you can then run it – but the method to use it is not obvious.
The installation of sql express edition gives a management interface to create the script and by using the command sqlcmd -S LOCALHOST\SQLEXPRESS -i backup.sql -o output.txt you can then run this using your favourite scheduling program. Thanks to Ryec on the Microsoft Forums, (scroll down)

As far as SQL server was concerned, the SQL service had not restarted after the reboot – not sure why as I didn’t have time to troubleshoot – I just needed to get the service running, which happened as soon as I launched Enterprise manager and attempted to connect to the server.

Anyone else had similar experiences?