Ok, so creating my google sitemap didn’t help due to a setting I had already setup in WordPress. When I was testing the migration I had set the privacy options under Settings/ Privacy to block search engines but allow other visitors. This had the unfortunate result of adding the disallow * in the robots.txt file – thus blocking google. Setting it back to make my blog visible has (hopefully) done the trick. Note that the robots.txt is automatically generated by wordpress so you not find one if you go looking with shell access – just access the file through a browser.
Hopefully this setting has not harmed by Google Page rank too much.
Update – just checked and my posts are now appearing in Google again – phew!

Had a weird error today with a machine only showing numbers instead of descriptions in the performance counters. Thanks to maximum asp this is solved by exporting the registry entries from hklm\ Software\ Microsoft\ WindowsNT\ CurrentVersion\ Perflib\ 009 from another machine and importing back into the affected machine. This kind of solution is great if you have another machine that you can export from – not too great if this is the only machine you have access too. If you don’t have access then “You could check the strings in the 009 key under the key described below and look for any garbled entries, entries that have two numbers, or entries that have two strings in succession (you should see ### string ### string, and so on in the multi-sz editor). This may not explain the different behavior between the local and remote cases because they both access the same registry values. (KB152153). Good luck with that!

Argh – I disappeared from Google.

I went to check something on Google that I know I had blogged about and was not happy when I discovered that I wasn’t appearing in Google results anymore. The annoying thing was that my posts were coming in as Technorati results or on a scummy searchengine spammer that had grabbed my content into their system.
I checked Google’s Webmaster tools and found out that my sitemap was woefully out of date so I downloaded the Google XML sitemap plugin by Arne Brachhold and also added the All in one SEO pack plugin for WordPress too.
After installing these two plugins, creating the new sitemap I then told Google where to go find my sitemap. Hopefully this should start getting my results back into Google again.

Powershell script to retrieve email from archived mailbox in Exchange2007

The other powershell script I worked on was to retrieve a detached mailbox that was still retained in exchange, archive the mail to a pst file, move the pst file to the managers home directory and then delete the mailbox again.
The following script does this – note some paths are hardcoded and I already have a temporary account in AD called tempuser that does not have a mailbox. This is the account that the deleted mailbox is attached to.
The main disadvantage to this method is that at the end of the script all of the detached mailboxes will appear as tempuser in the exchange console. In this particular script I also do very little error checking as this was designed for my use but hopefully helps others too.

Note that I use the $Host.UI.RawUI.WindowTitle statement a lot – this enables me to easily see whereabouts in the script I have got to. I much preferred to use the command title in my batch files to do the same thing. Likewise the $null = $host.UI.RawUI.ReadKey(“NoEcho,IncludeKeyDown”) is the equivalent of the batch command pause

Powershell script to retrieve list of emails from Exchange2007 in the past 24 hours.

As in my previous post I needed to obtain a list of emails that have gone through a mail server within the past 24 hours (so it can be run on a daily basis). I struggled with the code initially but ended up with the following.

This week at work I’ve been doing a fair amount of work with powershell. It has been a slow process as I’ve had no training in powershell and was basically teaching myself as I went along. I had two goals in mind.

The first was to automatically attach a mailbox to a temporary account, export the mail within this mailbox to a pst file, move the pst file to a folder and then delete the account again.  As Exchange2007 needs to use powershell to export the data I had to change my user deletion script to run within powershell.

My other goal was to write a report for all mail sent or received through the exchange server in the past 24 hours. Using the exchange tracking logs I was able to pull the information required to do this.

The second problem was causing me more hassles  as I could not work out how to retrieve the time from 1 day ago AND have the result in the format needed for the next part of the script. I could get the current time in the correct format OR I could get the time from 1 day ago but not in the current format. I went onto the #powershell room on irc.freenode.net but it looked like everyone was asleep as I didn’t get any response to my query.  I decided to post a tweet on twitter about the problem and within 5 minutes I had about 3 or 4 responses which was great. At the same time I also got a response in the chatroom. As usual with coding, there are several ways to get an answer.  However Jaykul was very helpful in telling me that “get-date (get-date).addays(-1) -f g”  is 2 ten thousandths of a second quicker than “[datetime]::now.adddays(-1).tostring(“g”)”

Now you can probably see why I was confused and struggling to get the code working!

I’m going to post the resulting code in the next posts to make it easier to search on.

I had two pc’s given to me last weekend to fix various speed issues. Thankfully I had downloaded the AntiMalwareToolkit from Lunarsoft recently so I did a quick update which meant I had a lot of antivirus and antispyware tools with up to date definitions ready on a cd.
The first machine was pretty straightforward and just needed ad-aware removing and reinstalling to fix ad-aware crashing on bootup. At the same time I scanned for virus and was pleasantly surprised to see none on the machine. The combination of Norton 360, adaware and malwarebytes had done a good job. Norton was crippling the speed of the machine though and I had to disable Norton whilst I ran other diagnostics on the machine as it was just painfully slow whilst running.

The other machine was a whole other story. Norton AV2004 does not do a good job of keeping machines protected when the definitions were last updated in 2005, although I think you’d all agree that no other product would either! Running MalwareBytes detected 400 antivirus files ranging from vundo,trojans, spyware2009 and other infestations. My initial scan was run after booting the machine into safe mode – normal mode was unusable, taking 6 minutes to launch regedit after eventually managing to hit start/run and type in regedit.
The initial scan took over 8 hours to run. Unfortunately I had not cleaned out the temporary internet files on the machine – all 18gb of them! After the first scan completed I selected all the temporary internet files and deleted them. It took about 20 minutes for windows to finish the “preparing to delete” stage. I’m not sure what exactly it is doing, but it is incredibly annoying to hit delete, walk away from the computer and come back 20 minutes later to see it then popup and say “are you sure you want to delete these files?”. I could have deleted the files from a dos prompt but it was taking forever to do anything, so opening a dos prompt and then navigating would have been very painful.
So after 3 hours of deleting files, a reboot I did another scan. This time it took 2 hours. So the moral of the story is to delete temporary internet files first. Interestingly I later ran AdAware and that actually asked me if I wanted to delete these files before it did the scan.
The machine was now fairly responsive…..in safe mode, but still took forever to do anything in normal mode. Scans were coming up clean so the configuration was obviously still screwed up somewhere. I tried to uninstall symantec using their uninstall package but that just hung using no cpu usage so it was a hard reboot and I tried the Norton Removal Tool. The first time it would unpack the self extracting exe but do nothing after that.
At this point I came across a thread in software tips and tricks with the same symptoms of the machine running slowly and the start button being unavailable. This thread was started in 2004 so I was a bit pessimistic about the solution of running a reg cleaner (as most of them are not really worth bothering with). However several people had responded saying that the solution worked, with a couple of posts from Jan 2009 so I figured it was worth a try. I had never heard of the registry cleaner, but I had heard of Jv16 Powertools, so I downloaded RegSupreme and let it do it’s registry cleanup. I looked briefly through the results and could see nothing really unusual so I rebooted and was really surprised that the machine started to respond normally. I was then able to run the Norton Removal Tool and remove Norton from the machine completely.
I haven’t completely finished with the machine yet, but I’m nearly there. You may be wondering why I took so long on this machine. To be truthful, if it was mine I’d have wiped it straight away, but as the issues got harder to fix, my stubbornness and curiosity got the better and I needed to know how to fix the problem and retain the data on the machine. After all, formatting is the easy way out and one day I’ll have a machine that I MUST repair in order to get data and this experience will have given me some helpful experience and preparation for that day.

64bit Symantec Antivirus does not update from Management Server

Discovered that 64bit clients of Symantec Antivirus have to be set to get their updates from Symantec servers using LiveUpdate, not from the Management server (as you would normally set the configuration to be). This may involve creating a new management group in Symantec’s Administration console and setting the update to not use the parent server as per the screenshot below. 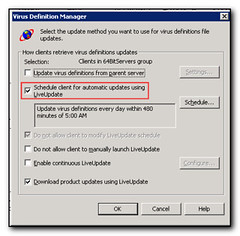 BackupExec 12 fails to LiveUpdate on Windows 2008

When trying to run LiveUpdate from within BackupExec v12 running on Windows 2008 you may get the error message “To receive updates, Backup Exec must be registered with LiveUpdate. To automatically register now, Click Yes. If you choose not to register now, you will be prompted again when you click LiveUpdate.” The solution is to right click the BackupExec icon and run as Administrator. LiveUpdate will work.