Kristen woke up in the middle of the night with chronic stomach pains and so at 5am I was searching through the United Health Website trying to find the nearest Hospital/ER to where we are staying. The strange thing is that the hospital 11 miles away was not listed. However this doesn’t seem to mean it is not “in-network” as other hospitals were listed ok. Their 24hr careline is only open from 8am to 8pm which is not much use when trying to find out whether your hospital costs are going to be less than $3600 or up to $10,000
So, we ended up going to the hospital anyway as by that point Kristen was in too much pain. The hospital was pretty good with not a lot of waiting to see someone – thankfully Kristen has been ill early in the morning both times we’ve had to go to ER so we’ve not had to wait for too long. Whilst Kristen was being looked at I was reading my book (when the needles came out) and looking at the technology during other waiting periods.
The triage area was computer driven using citrix to connect to their health system. This seemed to be a little slow, but still faster than the triage nurse could type. Extensive use of lookups ensured that data was entered correctly into the database, but meant that “daily” was not recognised and therefore a lookup was provided with options such as WEEKLY or DAILY. You’d have thought that the nurses would have realised to push the caps lock button OR a UCASE function made to ensure that the text typed in was correctly matched. I must admit I was impressed at the medicine lookup – it must be pretty tough keeping all the medicines in the db up to date. 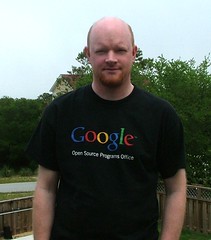 When we were moved into the ER Room itself, I was suprised to see a computer mounted high up on the wall with a flat screen monitor on a swing out arm. I was also surprised to see that they were running Novell for their network (and Mcafee antivirus). I wasn’t sure why the people would need icon’s on the desktop for “my computer” and network neighbourhood – with a locked down desktop I would have thought that the programs needed would already be on the start menu or the desktop.
One of the amusing conversations occurred when one of the nurses took a double take at the t-shirt I was wearing (shown in the picture) and then said that my t-shirt looked familiar. I really would hope that the Google logo is now familiar to most people!

The final analysis is that Kristen likely has a kidney stone on it’s way out, but as the CAT scan equipment is broken we won’t really know for sure (although all the signs are there that this is the case). For an amusing (PG rated) description of Kidney Stones, read this Blogography Kidney Stone metaphor posting.

Would you like to sponsor me on a 5k Run this month?