When I was a kid, I enjoyed the exciting tales of tunnels and escapes from prisons such as Colditz and as a young kid, that was basically all they were – thrilling tales of adventures and escapes. So naturally, a book about the Berlin Wall and the escapes (mainly) underneath it was going to be intriguing reading. I can clearly remember the night that it was announced that the wall was coming down and free movement was now available so although the ending of the book was not a surprise, it was still going to be an interesting read. 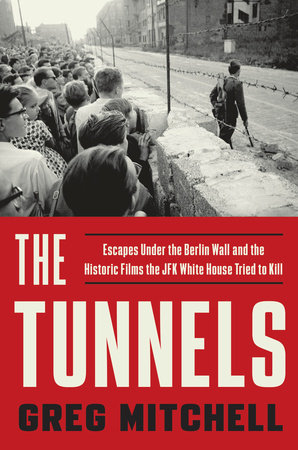 Greg Mitchell writes a very detailed and exciting book that gives details on several escape methods used to leave East Germany, not just tunnels although they are the primary focus. The depths that the diggers went to,their heroism and the risks that the escapees took deserves a wider audience and this book provides a very detailed account of what happened.

Apparently both NBC and CBS were trying to capture exclusive footage of tunnel escapes for their network and some of the book details the political twists and turns as the producers and networks attempt to get the films released despite the protestation of various governments who feared the political fallout and risks during this cold-war era. It was pretty scary to see just how close the US was to war with Russia in the cold-war era and how big of an impact the Berlin escapes were having.

The pictures included in the middle of the book give an additional indication of what happened under the streets of Berlin. I had not heard details of the escapes or seen pictures of the Berlin Wall so this book also provided a detailed history lesson from this era.

I thoroughly enjoyed the book and got a new appreciation for what happened back during those years and an appreciation for the freedom of movement that we currently enjoy. Highly recommended.

As a follow up to the book, I will be watching the NBC video, East Germans escape through tunnel that will provide an extra insight into the situation. I would recommend that you read the book before watching the film though.

A special thanks to Blogging for Books for the review copy of this book.

Book Review: The Book Of Joe