Backups may take some time to complete…. 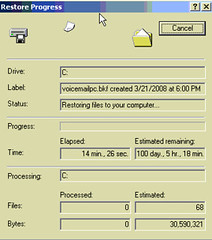 I needed to do a restore of some voicemails on a server and the calculations on how long it was going to take were slightly off as you can see from this screenshot – it actually got as far as 150 days before it reached the data on the file and started the restore off. Typically I have to do this when the voicemail server crashes (due to a power outage when it wasn’t on a reliable UPS). Everytime the server crashes I would have to restore 2 peoples voicemails (out of about 70 voicemail boxes). They are the only two who have their voicemail wiped and Avaya don’t care about the problem. What is weird is that this time the server had a controlled shutdown and not a sudden crash.
I sent the user this screenshot and told them it might take me a while but I’m working on it – they replied saying they didn’t think they had *that* many voicemails!